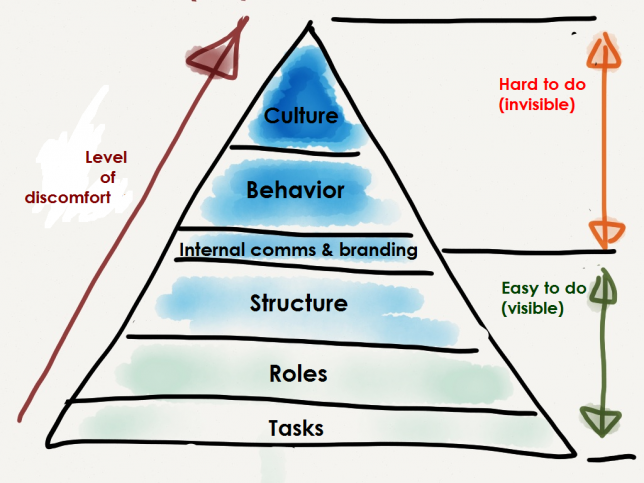 Very often we see it can be difficult to take the temperature of the organizations. A new CEO can decide so many changes as he wants but so long the middle managers do not accept the changes it will be a disaster.  Recent research shows that middle managers is being part of the obstruction which means that one does not achieve the changes that is necessary to achieve for the company.

Dr. Ole Hope defended his PhD dissertation in 2010 at the Norwegian School of Economic where his research confirms that middle managers often fighting rounds of discussions – and sabotages. Middle manager has significantly greater “responsibility” for the outcome of the changes than previously thought. “Essays on Middle Management Responses to Change Initiative” Dr. Hopes dissertation highlights the importance of great importance to the involvement of middle managers. Middle managers have great power and they know it and they use it.  Dr. Hopes thesis showed that middle manager’s acceptance and understanding of senior management’s amendments had a direct impact on whether the changes were realized or not. Dr. Hopes research also showed how middle managers actively involved in internal power struggles, intrigue, power relations, and how their behaviour affected the final result of the changes.

Dr. Hope himself has practical experience with changes that may not go as he had planned. In 2011 he was appointed the new CEO of Norwegian School of Economics, and in 2013 it was over. Everyone had great expectations for his accession and everyone was agreeing that he was right man in the right place. The ambitions were huge and he had big ambitions to make significant organizational changes at the Norwegian School of Economics. Unfortunately, it did not take long before the challenges started to top out for Dr. Hope as the new CEO. The middle managers of the organization did not want to change. So what Dr. Hope described in his doctoral thesis was fulfilled and he was not able to involve the middle managers to implement the changes he thought would be important for the organizations.

How do we draw conclusions out of this? The conclusion is that if you want to succeed with profound changes in an organization must involve the middle management team. This is where Dr. Hole think Lean comes in as a very good methodology. Lean is interdisciplinary, the traditional professions with silo thinking cannot be used. Interdisciplinary is the key to success. Lean is a quality improvement methodology and a set of principles derived from Toyota. Lean is equally applicable in complex knowledge organizations as it is in clean production enterprises with more traditional assembly line production.

Let’s go back to the temperature of the organizations. The temperature of the organization is important to measure before one start any kind of change process. The organizations real temperature one find among the employees. Some years ago Dr. Hole heard the following sentence; “This company is going nowhere; it is time to jump this ship; I am only here for the pay for my bills; the more things change here, the more they remain the same; The management has been changed each year here. On 10 years there has been at least eight or nine CEOs in the company. I don’t think management really cares about the company”– these are statements that are symptoms of a company that is dying a slow death due to a poisoned culture. The culture change is not managed by the CEO alone, very often we see that the board of directors change the CEO to often when the answer of the problems is in between or in the management group. Rarely are the middle managers held responsible for a bad culture, refer to above mentioned process of Dr. Hope.

This “death” sentence from the employee that Dr. Hole experienced may not be immediately visible in the top-line and bottom-line results but will definitely makes its impact felt sooner rather than later. Organizations that create a culture defined by meaningful work, deep employee engagement, job and organizational fit, and strong leadership are outperforming their peers and will likely beat their competition in attracting top talent.  Exceptional organizations create and sustain a culture that engages and motivates their employees – 83% of executives and 84% of employees rank having engaged and motivated employees as the top factor that substantially contributes to a company’s success. There is a correlation between employees who say they are “happy at work” and feel “valued by [their] company” and those who say their organization has a clearly articulated and lived culture. To be an exceptional organization, companies must focus on the intangible elements of culture-building. So how does one achieve a culture turnaround?

There is still a divide between what executives and employees think influence workplace culture the most (reinforced by multiple survey findings) – when considering what factors impact workplace culture, executives rank tangible elements such as financial performance and competitive compensation among the highest, whereas those factors were among the lowest for employees. In contrast, employees rank intangible elements such as regular and candid communications, employee recognition, and access to management/leadership highest. And here-in lies the areas where management will and intent can translate into tangible actions that can turnaround the corporate culture, no matter how far eroded, to a point that everyone can proudly say – This (the culture that you want) is in “OUR” DNA.

I have gone through quite a lot of organizational changes myself some of which impacted the culture positively and some that had disastrous consequences. Here are the top five actions that did/do work in triggering afresh energy, enthusiasm and effectiveness in the workplace to turnaround the corporate culture:

Step one: Figure out what aspect of culture needs to change – And to do this, you have to start with an assessment of your company vision statement. Is your vision statement still relevant to inspire the cultural changes you want? Do people still believe that it is an attainable vision for the company? People need to have hope for the future – is your vision (and core values and desired behaviours) a common rallying point that are meaningful enough to give people hope and a passion for their work? Don’t make the mistake of acting on perceptions instead of reality. Management and employees need to have a common starting point for a successful outcome to this journey. Do an ANONYMOUS, simple employee engagement survey (you can refer to the kind of questions asked in the Deloitte survey link above) and respect the results.  This will help you influence the organization’s response to your vision statement and values and yield the areas where change is needed to transform into a winning culture.

Step two: Identify the Influencers in the organization and bring them “in” – Who do people look up to in the organization, whose views do they listen to, who do they respect ? If you can convince these informal influencers on the need for a cultural change and the sincerity behind your intent to change the culture, your battle is half-way won. There will be a cascading effect: If you take a group of people, a subgroup of the larger population, and expose them to focused messages again and again, you will start to change their point of view. If you augment those messages with exposure to other members of the group, the messages will begin to have ever more impact. If the group becomes aligned, and it starts acting like a tribe, those messages will become self-reinforcing. And finally, if you anoint and reward leaders of this tribe, single them out for positive attention because of the way your message resonated with them, it will become fully baked in.

Step three: Start Walking the Talk in Small Steps – Culture is a combination of many small things. It is the way the organization works internally and responds externally. So what better way to reinforce the culture than demonstrating the cultural change that is needed by how you work and respond in everyday interactions? One step at a time. Don’t try to change the entire company at once. Start with one process or workflow and begin the change there through your actions (and resulting success) and then say “This is how we respond together” to drive the change. This is where the business operations team can play a key role to drive the cultural changes in a rapid way by defining and getting the team aligned and in agreement regarding goals, processes and metrics in a way that works for the company and what it stands for.

Step four: Be Courageous in Weeding out Behaviors that do not align with the Company Culture – Set a time period for the culture changes to take effect. And during this period and especially after this period, be quick, decisive and consistent in addressing the negative influences. As they say, one bad apple spoils the basket – not only do you need to ensure that you hire, promote and reward people not just for skills or performance but for attitude and behaviour that aligns with the culture that you want to foster but also help people who are not aligned to be aligned or move them quickly out of the organization. When valued behaviours are not demonstrated, no matter where he/she is in the hierarchy, there should be consequences that demonstrate that such behaviour is no longer acceptable in the organization. This is important to establish accountability.

Step five: Communicate and Celebrate the Winning Culture – People need to know they are part of something special and unique. And this is where sustained messaging comes in – there are so many inexpensive ways to do this apart from the standard blog, intranet and collaboration tools. Culture is also built in-person with live conversations and interactions.  Creating and retelling of the stories about the company (how it began, turning points, big wins) are important and so are establishing traditions that allow staff to let off some steam, relax and just have some fun (Maniac Mondays, Fun Fridays, Annual Days, Spot Awards – get creative !). Creating an atmosphere that not only fosters but actively promotes open, honest dialogue, transparent communication and great team-building opportunities goes a long way in achieving the culture turnaround that is needed.

You will know your efforts have yielded results when every employee in the organization can state the company’s mission and core values in their own words, when your customer net promoter’s values (NPV) rises, employees praise and encourage each other, internal escalation and long email cc lists are a rarity, and leaders are “connected” to the rest of the organization. Or just walk down the corridors and count the number of smiles that you can see

Dr. Hole believe that in a leadership company most people will like their work. Dr. Hole also believe on corporate responsibilities, where the company and employees work together for a better cause within charity. Leading fosters, a working atmosphere that stimulates an open exchange of ideas and fosters dissent. People should show a genuine concern for one another and treat one another with fairness, through the charity work one can learn to work together, as peers and friends. With such an atmosphere it should be a pleasure to come to work.