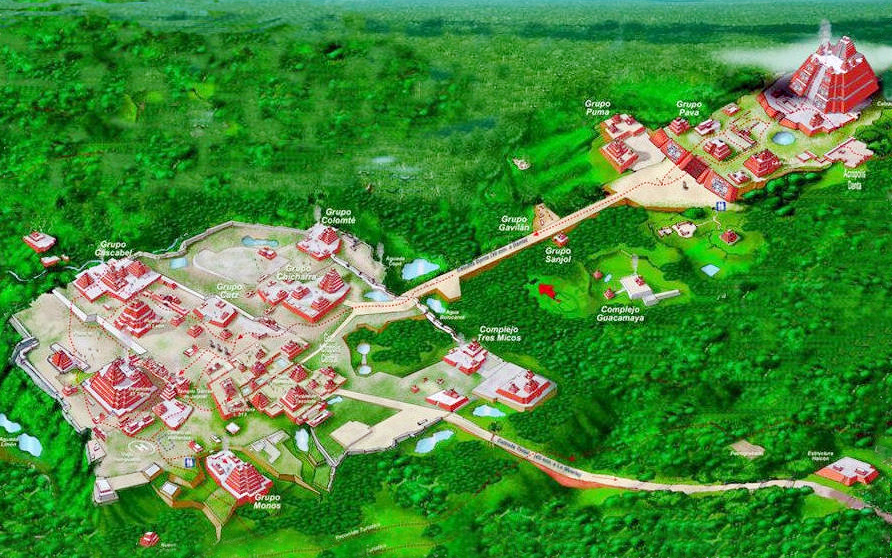 Now we see that the corona virus is perhaps the biggest game changer for tomorrow’s society today. The coronavirus has cut emissions faster than years of climate negotiations. Does the outbreak reveal what life might be like if we were to act seriously on climate change? Or what it might be like if we don’t?

As I write in my headline, great civilizations have come and gone through the ages. If our civilization is to survive for many generations to come, we must change our overconsumption and learn from past histories. If we do not learn lessons from past histories, it may go the same way with our civilization as it did with the Mayan civilization. Now we see that the world has stopped for a while due to the corona virus. How long this will be nobody knows, how this will affect life after this we do not know either. But let us reverse this corona crisis to look back at the history and not make the same mistakes as our ancestors.

This is not the first time a civilization has stopped. Thousands of years ago, the Mayan culture just stopped because of overconsumption and predatory use of natural resources. Researchers today claim that this is one of the main reasons why the Mayan culture was eradicated. Therefore, it is important that we know human history and learn from it and not repeat the same mistakes that our ancestors made

El Mirador, the Lost City of the Maya, now overgrown by jungle, the ancient site was once the thriving capital of the Maya civilization. The ancient city of El Mirador, once home to an estimated 200,000 people and the capital of a complex society of interconnected cities and settlements that may have supported upwards of a million people. In other words, this was the first mega metropolis found in human history. The civic centre of the site covers some 26 km2 with several thousand structures, including monumental architecture from 10 to 72 meters high. The Maya settlements, dating from around 1000 to 400 B.C. and was far more sophisticated than previously thought. At first, it was believed that Mayans were hunting people and who lived primitive lives. But new research and excavations over the last 100 years have shown that this was a people who lived sophisticated and in large mega cities, long before the rest of the world had knowledge of what a mega metropolis was.

One of the key elements for this tremendous rise in human population was the many bajos, seasonal swamps, in the region. Tropical-forest soil contains hardly any nutrients and most of the nutrients present get washed away by rain. Yet the Maya developed a system that was highly productive. In the Mirador basin, the swamps provided the solution. By importing mud from the swamps by the thousands of tonnes, the Maya created mud-covered terraces ready for agriculture. By adding lime to the soil, they elevated the pH, making it suitable for a variety of crops: corn, squash, beans, cacao, cotton and palm. When the ground was depleted of nutrients, adding another layer of mud reinvigorates the fields.

A feature of El Mirador is the quantity and size of causeways, internally linking important architectural compounds, and externally linking the numerous major ancient cities within the Mirador Basin during the latter part of the Middle and Late Preclassic periods. The causeways are commonly referred to as sacbeob (the plural form of sacbe, meaning “white road” in Mayan, from sac “white” and be “road”). These are raised stone causeways raising 2 to 6 meters above the level of the surrounding landscape and measuring from 20 to 50 meters wide. One sacbe links El Mirador to the neighbouring site of Nakbe, approximately 12 km away, while another joined El Mirador to El Tintal, 20 km away.

An aspect that researchers and scientist believe may have led to the downfall of the system, was soil erosion due to deforestation. Their agriculture was much more intensive than thought before, and they were cultivating every inch of the land. The Maya were fond of plastering buildings, houses, floors and even ceramics with layers of lime plaster called stucco. This plaster created a nice smooth surface which facilitated painting. With this stucco, the Maya created many astonishingly beautiful artifacts, as well as smooth-walled pyramids and ‘paved’ roads. But a darker side to this production became evident when consumption started to evolve into conspicuous consumption. The production of lime needs a large amount of wood. Archaeologists have calculated that to produce 1 ton of lime cement, 5 tonnes of limestone and 5 tonnes of wood were needed. Also, dry wood was not suitable due to the large fluctuations in temperature, as a stable temperature was needed to properly burn the limestone. To accomplish this, green wood was needed. So, the Maya cut down every available green tree in the area.

Excavations in and around the bajos (swamps) revealed the effects of deforestation. When trees vanish, the soil becomes loose and is easily transported by water (e.g. rain). Also, water flows downhill, and the only places in the Basin where it could flow to, were these bajos. The nutrient-rich muck that was so vigorously imported from the bajos was now buried under a 2 to 3-metre thick layer of sterile clay. This cut-off the driving force behind the sustainable agricultural fields. When you cannot replenish your crop fields, more and more harvests start to fail. In the end the failing crop fields led to starvation and collapse of society.

We see much of the same extraction of raw materials that was made during the Mayan civilisation in our new modern civilisation. We in the Western world have been spoiled by the fact that everything we buy should cost as little as possible. Today we live in a consumer society where buying and throwing has become our mantra. I hope the world manages to turn the corona eruption into something positive for the sustainable management of our mother earth.

The biggest challenge today is that it is cheaper to extract new raw materials than to recycle recycled materials. This must end.